Supreme Court justice Ruth Bader Ginsburg has died at age 87. Ginsburg is most noted for her lifelong fight for equality for women.

At a time when most people would be contemplating their mortality — lying on a gurney minutes before cancer surgery — Ruth Bader Ginsburg mulled over Supreme Court cases.

That’s what she told Bronwyn “Bronnie” Adams, the Naples resident who was her interior designer, neighbor and friend for years, reports the Naples Daily News, a USA TODAY Network publication. Those cases crowded out the fear, just like Ginsburg’s well-known love of opera; a performance, according to Ginsburg, could banish the worries of the day. 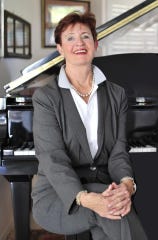 Adams, a licensed interior designer who splits her time between Washington, D.C., and Naples, worked with the late Supreme Court justice for 40 years before Ginsburg’s death Sept. 18. She began as the designer of Ginsburg’s home in the Watergate when she came to the nation’s capital as a judge on the U.S. Court of Appeals.

Ginsburg was not the kind of person to spend time on small things. Adams still remembers her sole question when her company made its first presentation: “How much and when will it be finished?” 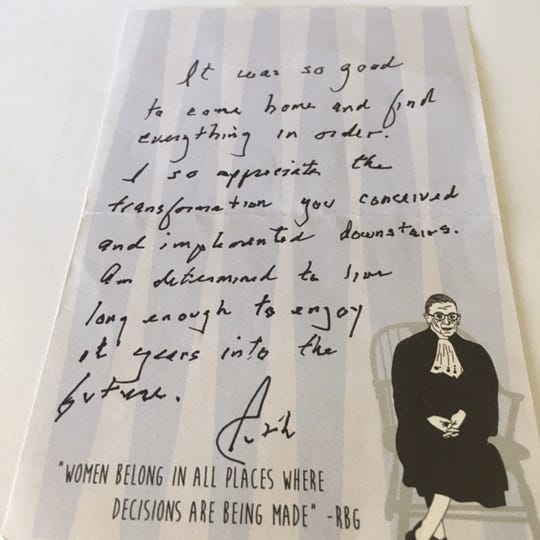 And she meant finished: “She came to Washington with a suitcase. The furniture was all finished. The built-ins were finished. She did send a lot of books. But the bed was made, the linens were in the closet and toothbrush and toothpaste were in the bathroom.”

Adams remembers Ginsburg as a woman who wanted everything in order. When it wasn’t, she called Adams. Despite the fact her initial contract was to design her home, “we just became part of the staff.”

Even her husband, Marty, a premiere tax lawyer and professor at Georgetown University, who was an impeccable cook, occasionally asked for some organizing advice in the kitchen.

Ginsburg loved art as well as opera, and one of Adams’ challenges was to fit the new pieces Ginsburg had brought into her home.

“She would call me and say, ‘I bought a piece of art,’ and I would say ‘Aaaaagh!’ ” Adams recalled.

“It got so when she was going on vacation, I’d say, ‘No new art!’ ” That never worked, Adams added.

“She had a bond with a lot of Indian artists, with artists around the world.” 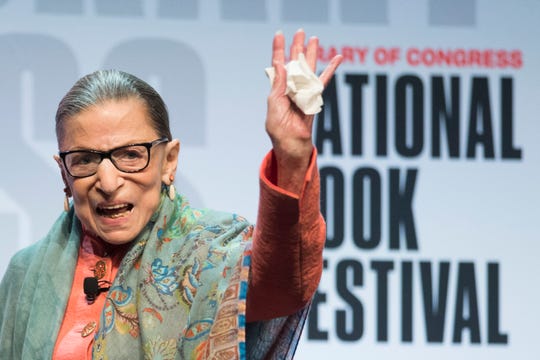 Adams remembers redesigning both of Ginsburg’s Supreme Court justice offices. The justices were no drain on taxpayers, she observed: The justices’ offices received a redecorating budget in rotation.

So when Ginsburg moved into Thurgood Marshall’s vacated office she was forced to keep a carpet she disliked. She could only make her desk more ergonomic by adding a piece of black granite to its top.

When Justice David Souter decided to change quarters, his office had been stripped down to the concrete in a project to rid the building of asbestos. After Ginsburg moved into Souter’s office, Adams remembers designing extensive shelving for her books and awards — “and they continued coming,” she added — in its more contemporary look.

The only debate over design she recalled came from a consultant’s decision to make her unit more accessible, when Ginsburg returned from a surgical procedure. The shower safety bars, especially “a humongous” one in her bathroom with wallpaper of Mozart scores, set her off.

” ‘Get that that out immediately,’ she said. It was just the whole premise of it,” Adams recalled. “That she would look handicapped was way beyond anything she could imagine.”

Far from snubbing her late-in-life fame as “the notorious RBG,” a variant on a rap singer’s name, “she loved it,” Adams recalled. She was tickled by a production of her as a bobble-head doll: “She gave them out as gifts,” she recalled, laughing.

Yet she remembered the late justice as “very private. The one thing nobody really realizes is that Ruth Bader Ginsburg was extremely shy. If we would be in the elevator and people would try to get in, she would get over in the corner.”

She also recalled Ginsburg as the complete professional.

“She was a very professional person. You would go in and then do your work and then leave. But then sometimes she would start talking to you and you would say ‘Omigod, she’s talking to me.’ I was awestruck. It was all I could do to respond to her and she was sitting there discussing things with me.””

“She was a very professional person. You would go in and then do your work and then leave. But then sometimes she would start talking to you and you would say ‘Omigod, she’s talking to me.’

“I was awestruck. It was all I could do to respond to her and she was sitting there discussing things with me.”

She remembers the late Supreme Court Justice as a thoughtful person as well, and treasures the note Ginsburg sent to her after surgery, writing: “I so appreciate the transformation you conceived and implemented downstairs. I am determined to live long enough to enjoy it years into the future.”

The hope may not be possible, but Adams hopes her stationery signature does: “Women belong in all places where decisions are being made.”

Ruth Bader Ginsburg: Becomes first woman to lie in state: 8 other strides she made for women

Supreme Court Justice Ruth Bader Ginsburg will lie in state at the U.S. Capitol, becoming the 1st woman to have such an honor.

Sun Sep 27 , 2020
Garden Trading Gold taps, marble sinks, round mirrors and free-standing bathtubs are among the most popular bathroom trends on Instagram, new research has found. Over the years, Instagram has become a brilliant source of interior design inspiration for the home, especially when it comes to the bathroom. With many of […]

What is smart heating, and why do you need it?

House re-roofing: Signs and How to Get a Reliable Contractor