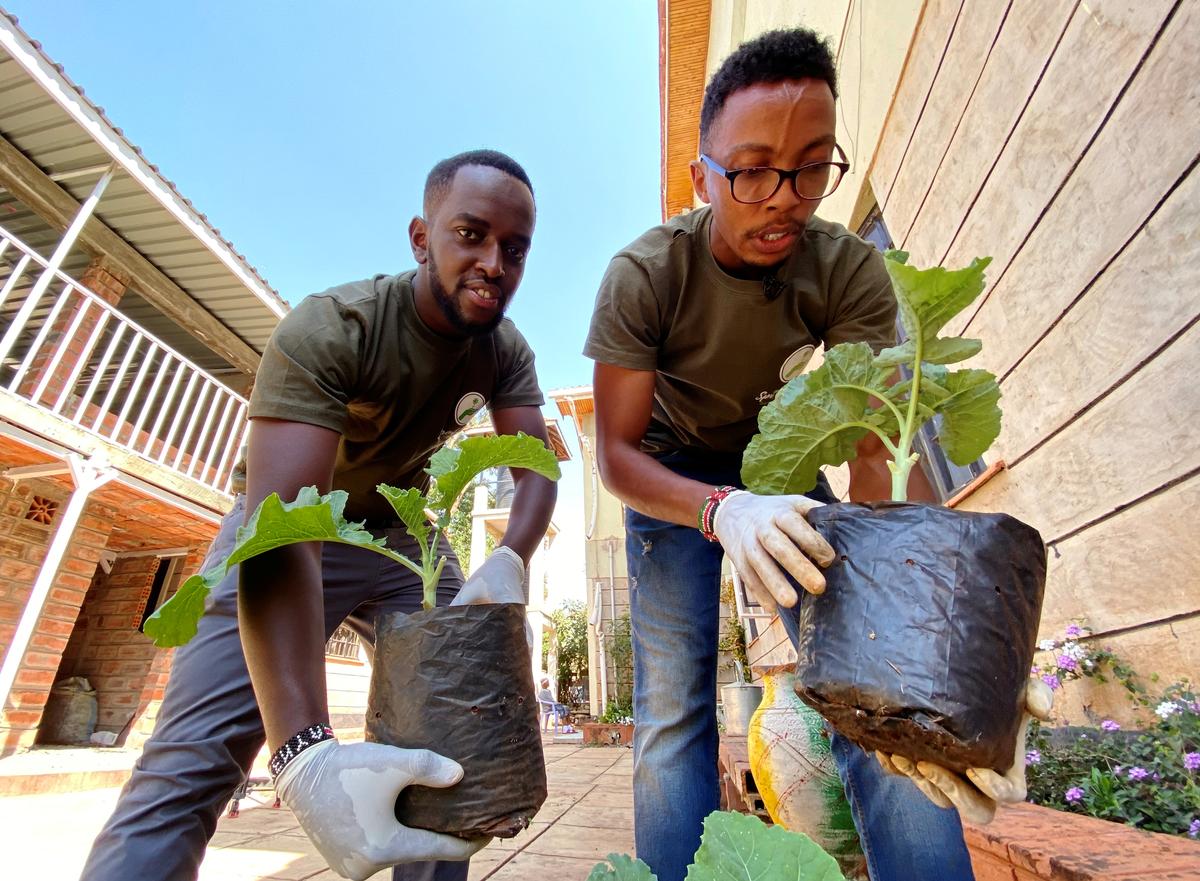 NAIROBI (Reuters) – Kenyan urban farmer Francis Wachira credits a soil recycling company with keeping him afloat financially during the coronavirus crisis: it helped him to start producing herbs and vegetables on his tiny Nairobi plot.

Ted Gachanga and Michael Kanywiria agronomists who co-own Sprout Organic company display samples of vegetables grown in a compost that is sold to urban farmers to grow food in squeezed spaces during the coronavirus disease (COVID-19) outbreak in Nairobi, Kenya June 30, 2020. REUTERS/Edwin Waita

The locally-owned company, Sprout Organic, mixes animal bone meal, seeds, foliage, dry leaves, twigs and kitchen waste like banana peels, to concoct a composite that is then sold to urban farmers like Wachira to grow food in small spaces.

Wachira, 71, used to make a living by renting out tiny tin shacks he built, but the coronavirus pandemic meant his tenants could no longer pay him.

“We are making good money out of this,” he said.

Ted Gachanga, an agronomist who co-owns Sprout, says their product resembles black cotton soil. Worms are usually added to the mixture to help it mature, a process that takes about four weeks.

A 20 kg bag sells at 3,500 shillings. Gachanga said demand had risen by 10% during the pandemic, which has cut incomes and impinged food supply chains.

“People are seeing the need to grow their own produce,” Gachanga said.

Close to 15,000 people in Kenya have been infected by the COVID-19 disease since the first case was reported in mid-March, official data showed. Economic growth has slowed down sharply, with many job losses in sectors like tourism.

Sprout employs three staff, and its owners say that although their technology is not new, they have patented the formula for the composite. They hope to expand production beyond Nairobi to cover other towns.

“Anybody can be an urban farmer,” said Michael Kanywiria, a co-owner of Sprout.

How to Organize Your Kitchen